The existing church is a Georgian T-plan church built in 1783 on the site of an earlier church of 1610 or before.  The earliest Christian settlement  was on the hillside to the east of the present building and thought to be contemporary with St. Columba.  The Christian presence  in Kilmodan is mentioned in  ecclesiastical documents in 1250 and 1299.

St. Modan , to  whom the church is dedicated, was an early Celtic saint who  lived around the time of St. Columba. 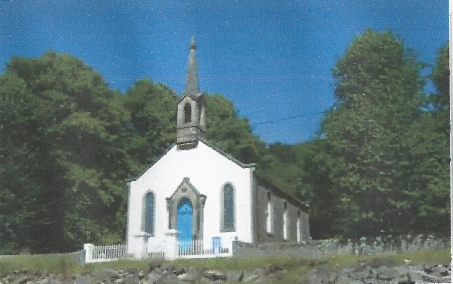 The origin of this church derives from the concern of a lady, Mrs John Campbell, the wife of the laird of South Hall, for the spiritual well being of the tenants who worked on her husband’s estate and others who lived in the vicinity. The Scottish ecclesiastical parishes in the early 19th Century and in country districts were often of large extent and the parish church awkwardly placed for the convenience of some of the parishioners. The parish church for South Hall was at Inverchaolain, on the opposite side of Loch Striven and so accessible only by boat or by many weary miles on foot.

The new church was completed and opened for worship on 23 August 1840 by the parish minister of Inverchaolain, the Reverend Alexander MacTavish. A sad feature of the opening was that Mr and Mrs Campbell were not there to see the completion of an enterprise which owed so much to both of them. They had gone South for Mrs Campbell’s health.

Kyles Church was built in 1898 and stands in about half an acre of ground in the village of Kames. There is a hall, a small meeting room, a well equipped Church Office and a Kitchen equipped and registered as suitable for the provision of lunches and other meals. The interior of the Church was renovated and completely redecorated some 6 years ago and the building has been re-roofed.   Disabled access and toilet facilities were recently added.

For service times at the above  churches Click Here

Our Sister Churches in West Cowal

Services are suspended  during the current lockdown